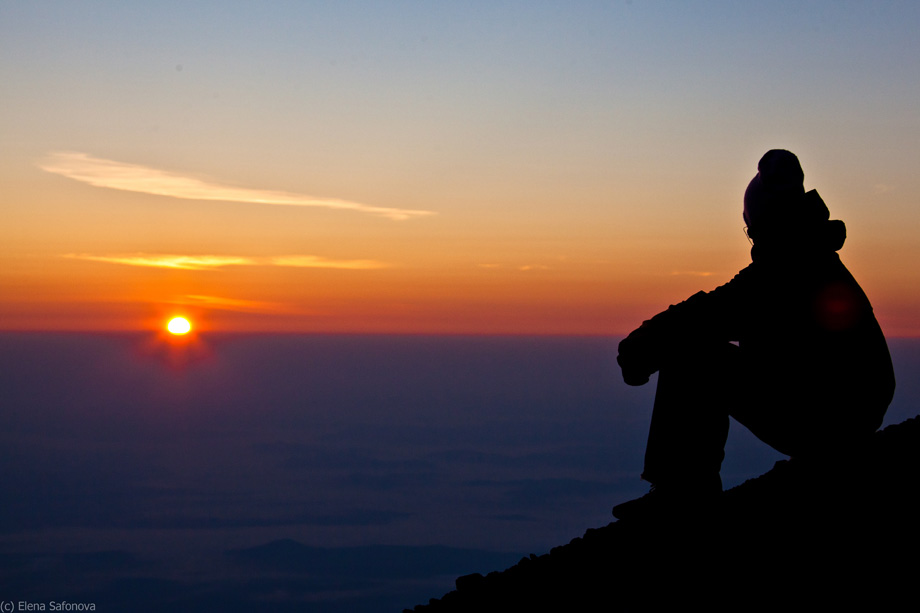 Sunrise of the Avacha

To continue the autumn topic I’d like to recall my brightest bittersweet memory of this summer.. I’ve been crazy about spending the night in the active volcano crater for a long time, or let it sound more romantic – greeting the sunrise on top of one of the most restless volcanoes of Kamchatka – the Avachinsky volcano (2751m). It’s situated within the Nalychevo nature park in close vicinity to the krai center. 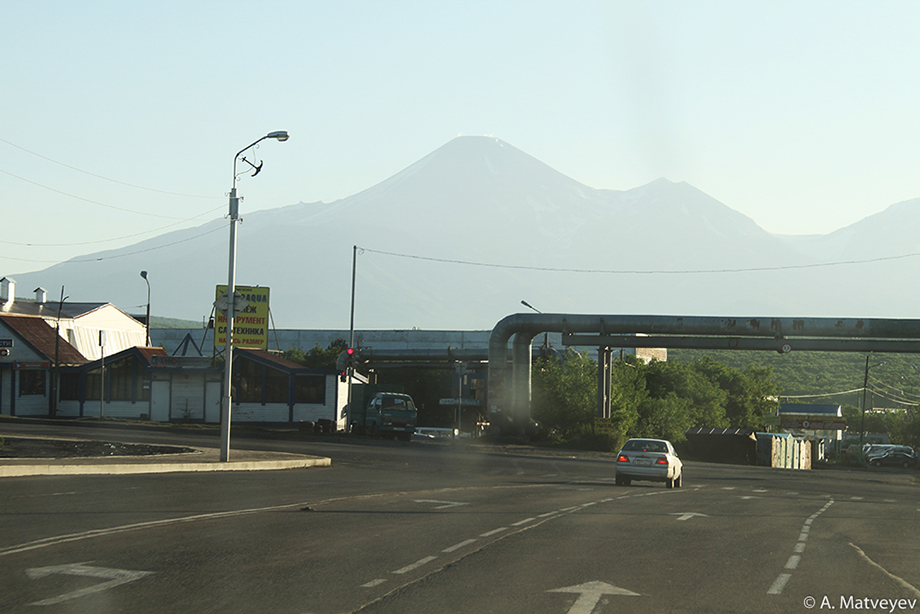 It was a lucky coincidence that familiar tourist club from Viluchinsk was planning its “little ascent” of the volcano at the same time. Those who have first-hand knowledge of mass climbing will agree that joint slag-wading is a doubtful pleasure (esp. for people who’ve been on top not once). 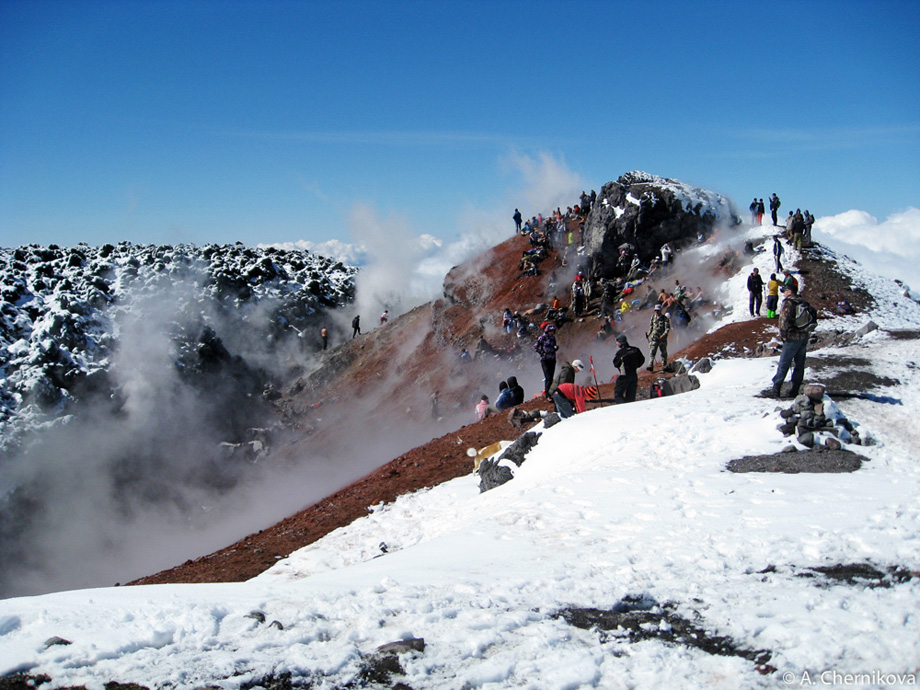 It turned out that the number of adventurous romantics is rather small, or probably the majority of them gave in to some leisurely pastime. As a result, I enticed my friend Lena Safonova with this idea, as well as my two more buddies Katya and Volodya, packed up backpack and set off.

We got to the foot of the volcano by 10 pm. Later some tourist buses came, but, I guess, they had no intention of climbing the volcano at night. Only two young ladies and a fearless cyclist went to ascending trail an hour later than we’d done.

We were not going to put up our tents, instead, having picked up our backpacks and slammed the car’s doors, we started our journey, tourists’ surprised looks following us. None of us was going to break records, the pace was light and quiet. Though, Lena had to carry all her portable photo studio, but we shared the burden.

Words fail me when I try to describe that beauty reigning around us… Nevertheless, I’ll make a try!.. The sun was sinking slowly behind the neighbouring giant – the Koryaksky volcano, while the best sunset ever seen by me was taking shape in the sky. With every meter the scenery was getting even more picturesque. A bit later, when bright stars started to light up in the bluish cloudless sky, the picture became perfect. 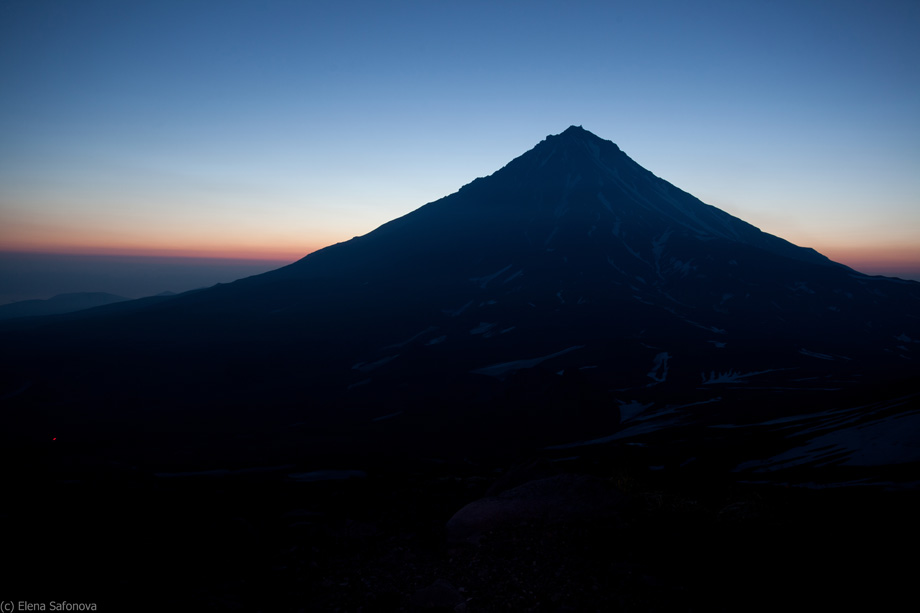 By midnight we reached 2000 m above sea level, from that place we decided to take a picture of the starry night with slow shutter speed. We had plenty of time, thus we organized a 2-hour break. Cold wind forced us to take out warm clothes from our backpacks, but in the long run that nasty moment came – all warm stuff was already put on, but the temperature was going down. The art demands sacrifices, and taking picture with extended exposure takes maximum time and minimum movement around, that’s why we were sitting motionlessly on the stones, drawing closely near each other and admiring the lights of nighttime Petropavlovsk against the bay and volcano range. 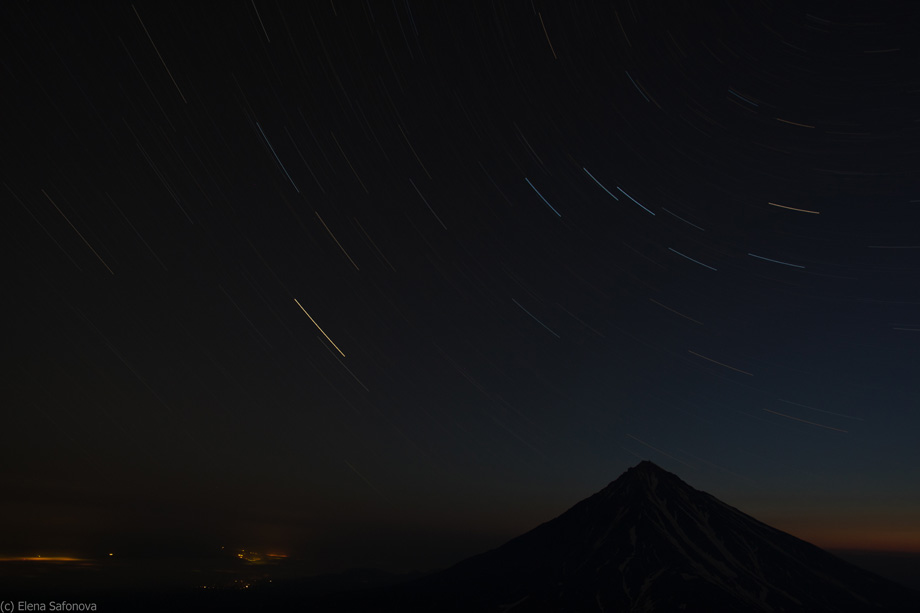 The Avachinsky volcano is generally called our “home volcano”, because it happens to be rather close to the town. However, this is an active volcano, and its steaming fumarole gases are visible from the town. The ascent of the Avachinsky volcano calls for no alpinist experience, good physical shape will be enough. For convenience climbing can be divided into 3 stages: the first part is a temperate rise till 2000 m, then there is a relatively smooth sector along the crest, and the last stage is a steep rise along the volcano cone. The main trouble of the ascent is the third stage, the last 700 m till the top. 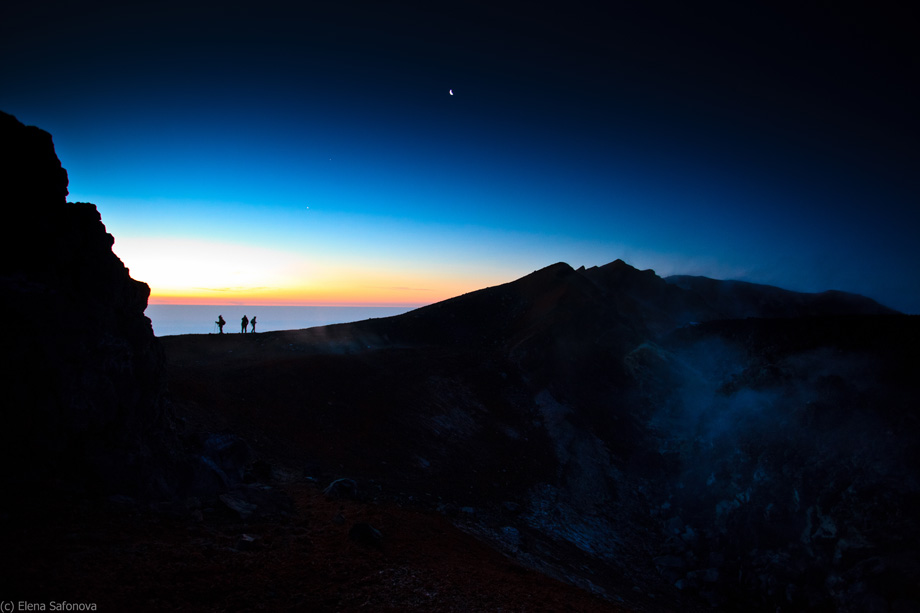 Having calculating the time, so that to reach the top with the first sun beams, we were walking slowly in a zigzag manner along the slag cone. To step on the slag in the dark isn’t the best idea, but we didn’t care, as we were looking forward to seeing the magnificent view. We got disappointed a little as we’d expected pitch darkness at that time. At 2500 m with the lack of other peaks and town lights, we saw that the edge of the sky was slightly illuminated by the sun. to imagine the picture just remember travelling by plane – when in the morning you fly to some city you see that only the cloud blanket protects the earth’s night obscurity from the sun burning above. Thus not having gone out properly in the west, the sun is already shining shyly in the east. When you see it, you want to climb higher the top is to enjoy the picture to heart’s content. 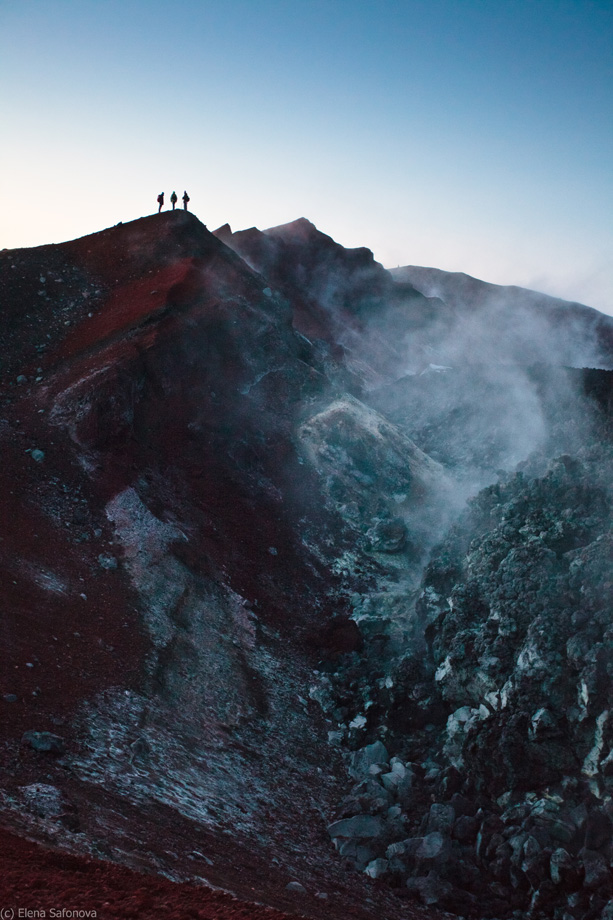 Having made a couple of panoramic photos, we found a shelter from a cold wind behind a bulky stone on the very top of the Avacha. 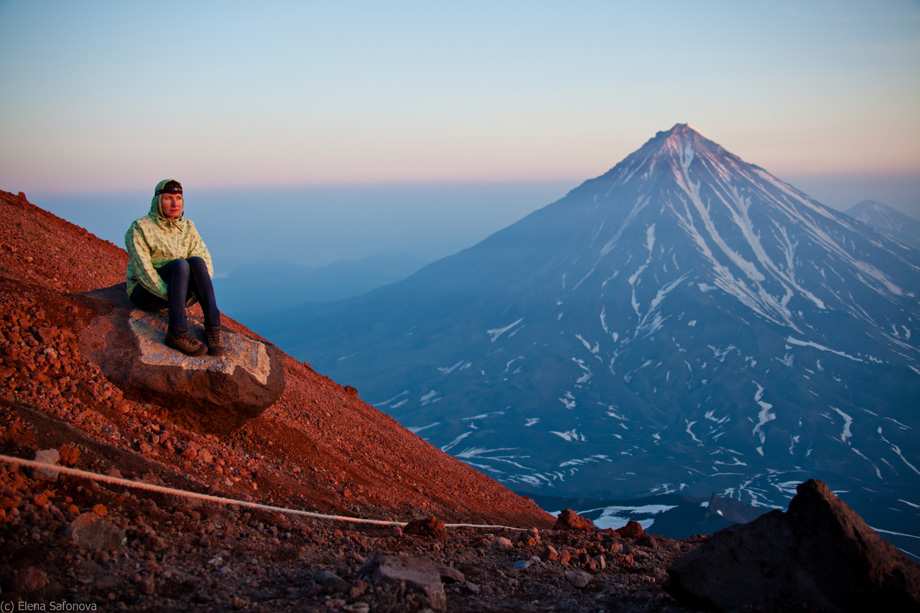 Holding lard and bread in the left hand and a plastic glass with icy red wine in the right one, we were waiting for the appearance of the beaming disk in the east.. 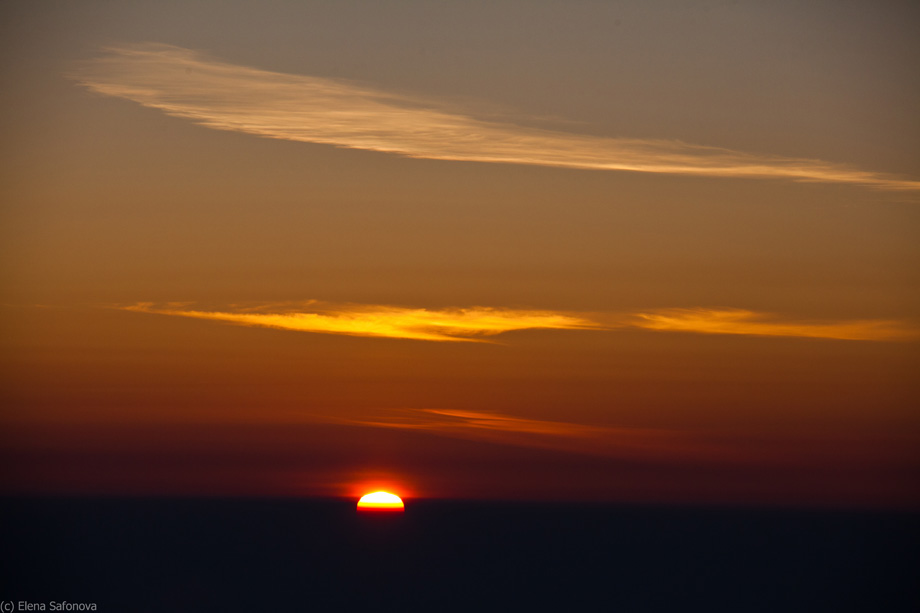 In fact, we stayed there on principle, as bodies forgot about all bright and romantic moments long ago and demanded insistently to go down and warm up. Only after we had greeted the sunrise, did we begin to climb down with a sense of duty done. 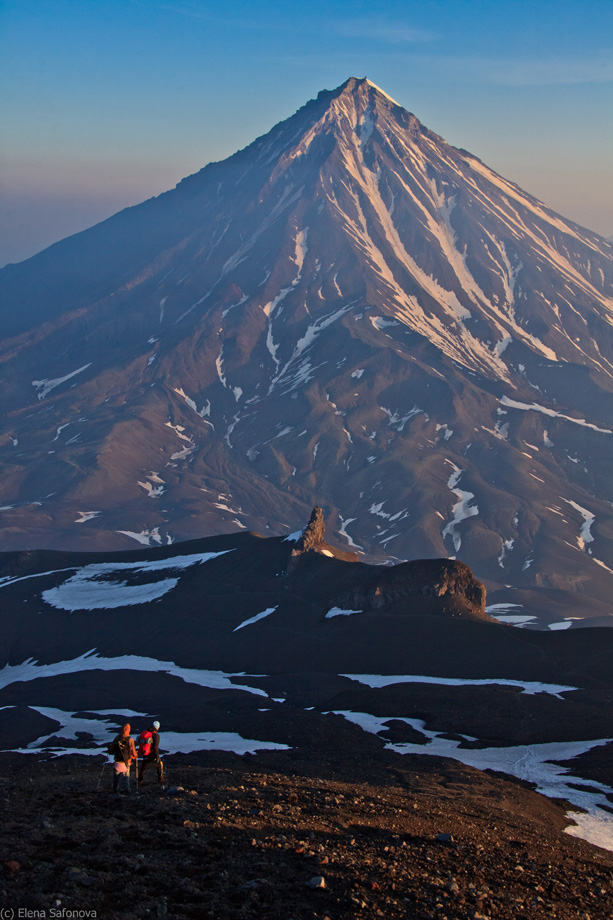 By the way, while descending we met those two girls bending under the weight of their cameras and downhiller Denis, the latter managed to lift his bike up to 2751 m and cycle down to the camp! Man’s abilities and skills will always make me wonder! 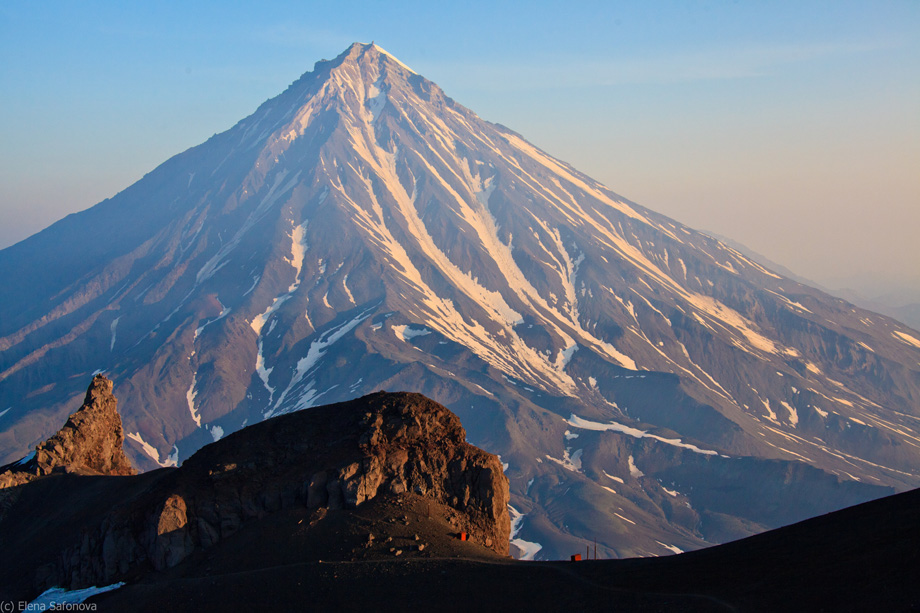 НA new day came, it was dawning, and tourists that had got up not long time before, started to storm the volcano in swimsuits only batching in the sun. As for us, we packed in warm undergarments and winter jackets were still going down, our teeth chattering and bodies shivering with cold. 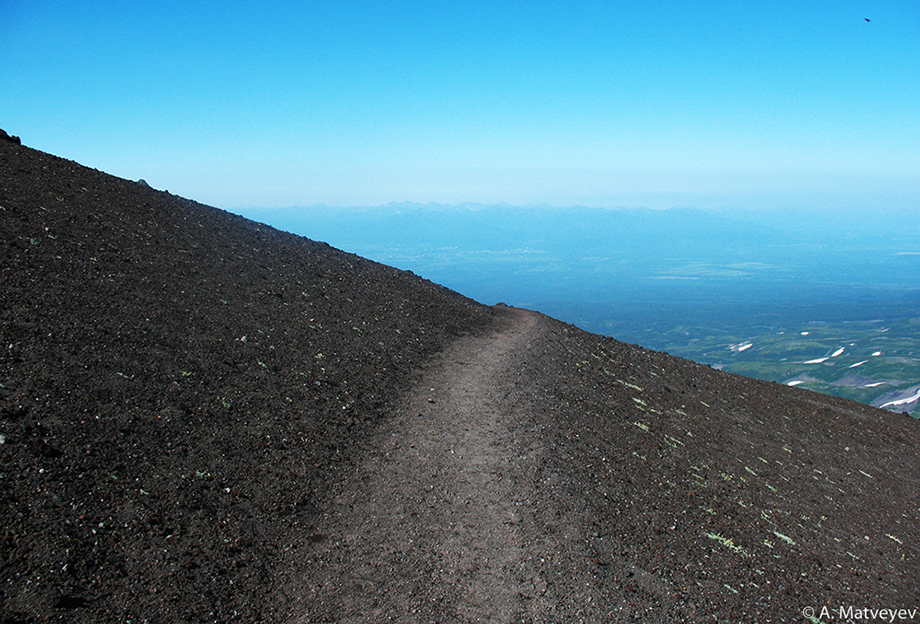 When we got to our car, we were completely puzzled what part of the day was it, and decided to do the best – to go to sleep. We settled around the car and fell asleep; however those sassy ground squirrels (called evrazhka) were bothering us and demanding for breakfast. 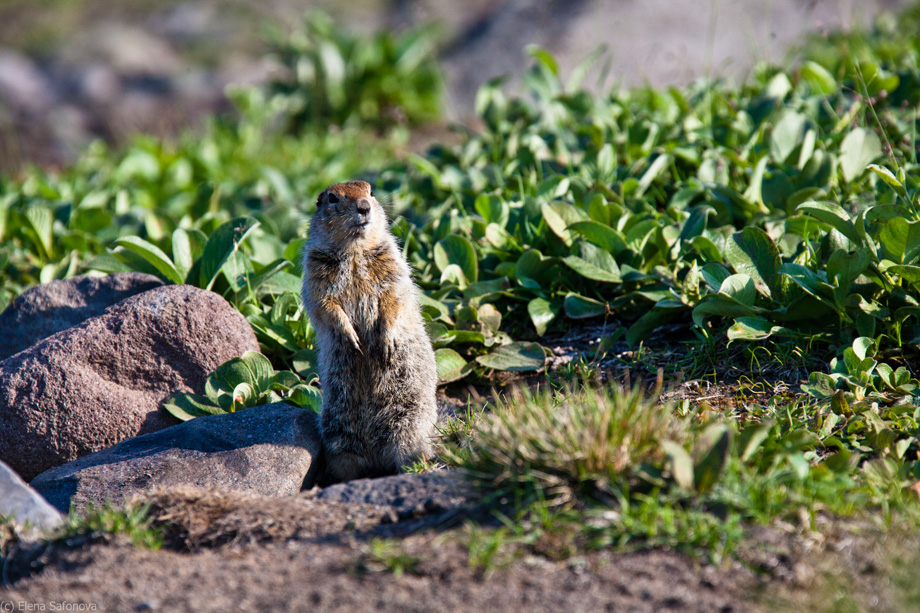 Having attacked our sweet slumber, they forced to get up and set off back home. 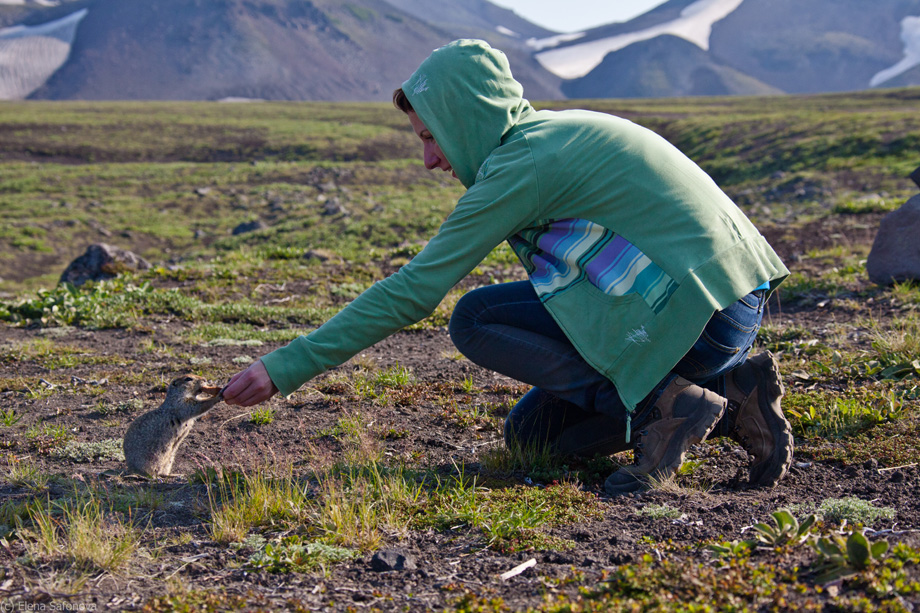 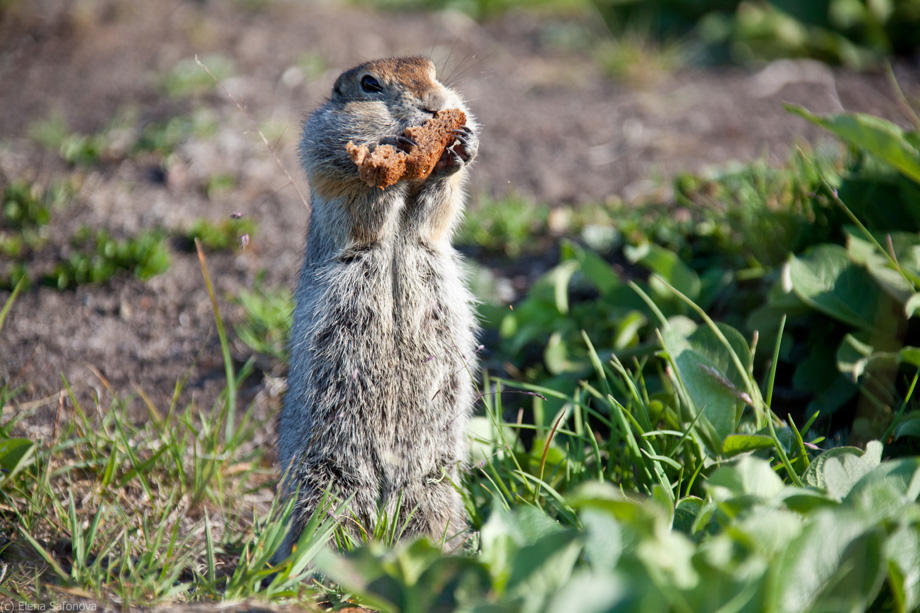 It was a marvelous climb! The worthy bright impression for remembrance.