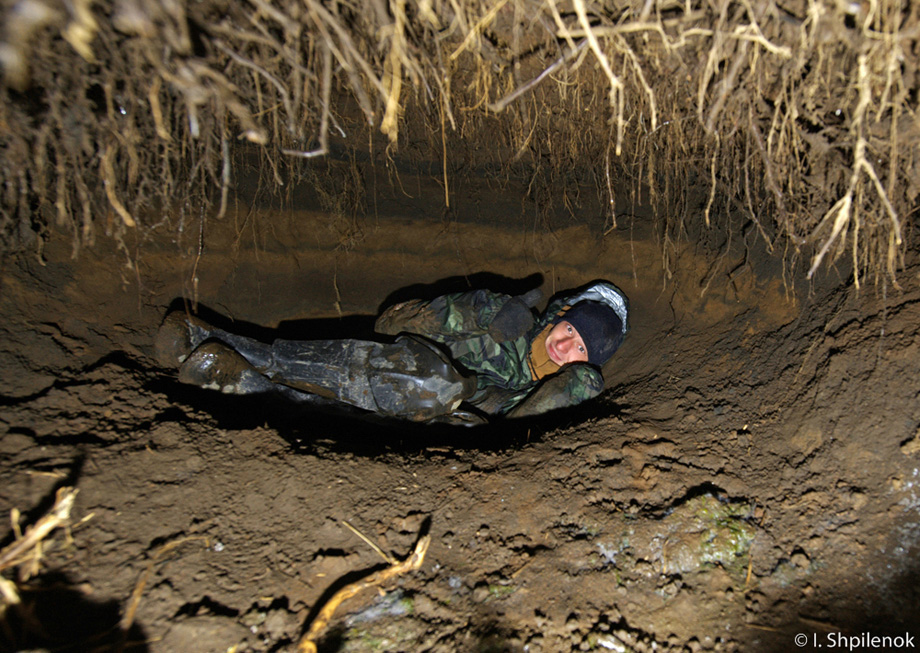 My happy birthday and honey lovers

I will remember my 22nd birthday for good. It’s impossible to forget that morning! Not warm sun beams woke me up but clanging and gritting of rusty barrels our furry buddies – brown bears – decided to play with. That sight was one of the best presents equally with a couple of Snickers bars a bottle of Coke from Igor Petrovich Shpilenok. It was a real luxury in the middle of nowhere (to be more precise on the territory of the Kronotskiy preserve). 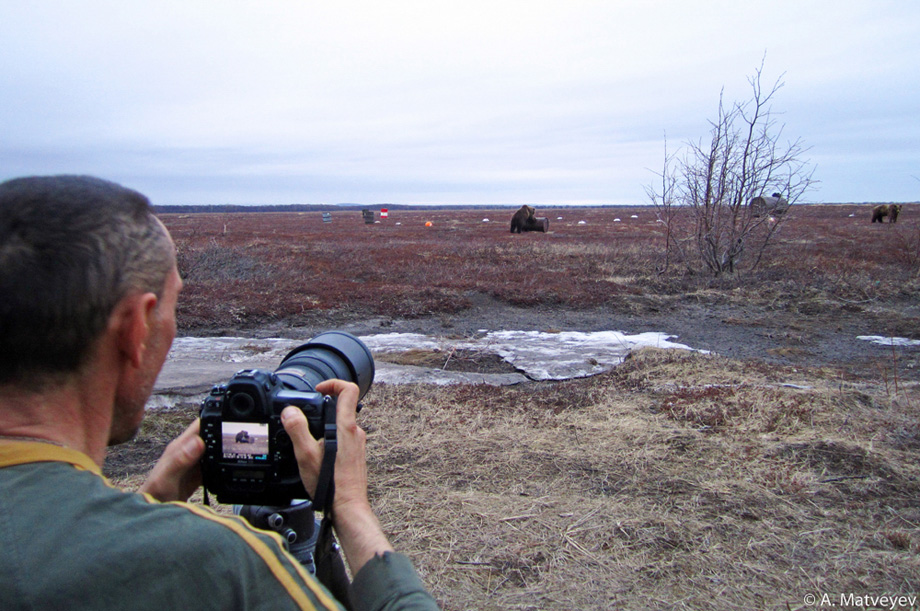 A famous female bear called Suzemka was waltzing around the helicopter pad on her hind legs with a kerosene barrel. Her fellow, a young bear, didn’t keep up with her and demonstrated obvious confusion. When he got his chance to play with the “toy”, he just sniffed the barrel having no idea what to do with it. 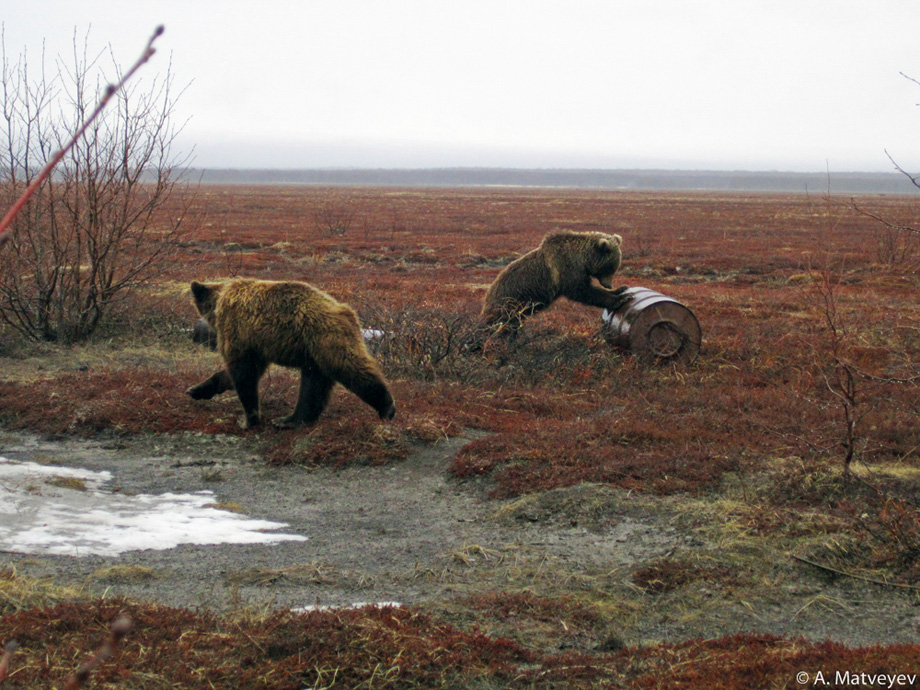 We enriched ourselves with new photo and video stuff of bear show, and then shortly after a little rain we set off for our long planned den study. 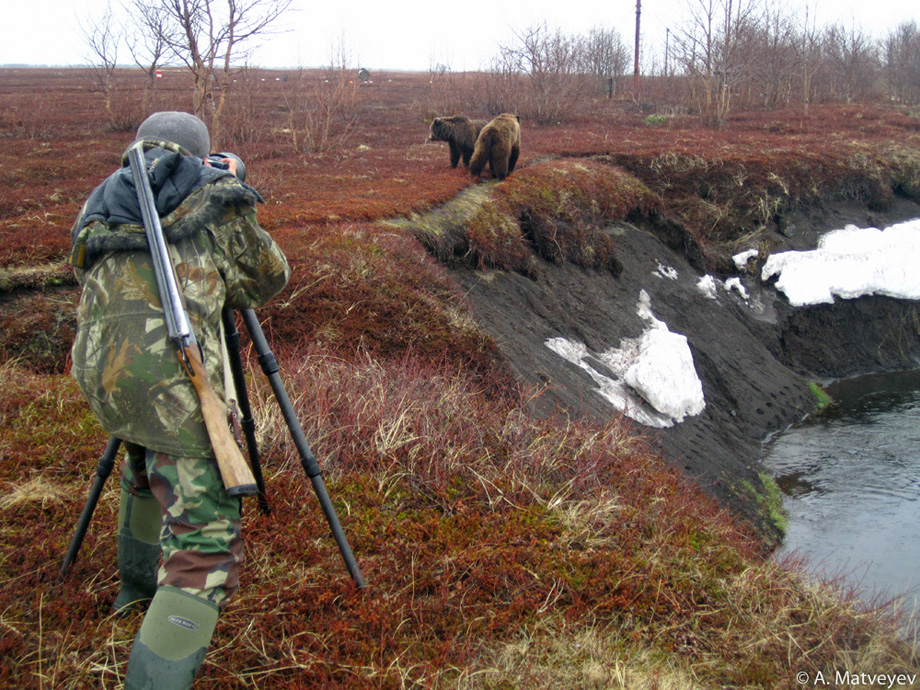 The journey was not peaceful. Every now and then we got into hidden hummocks or swampy places, and just in the middle of the way we were caught by a heavy shower. Though the thought of turning back to our warm and dry inspector’s hut was extremely tempting, we decided to move on… and not in vain. The weather took pity on us and became sunny. 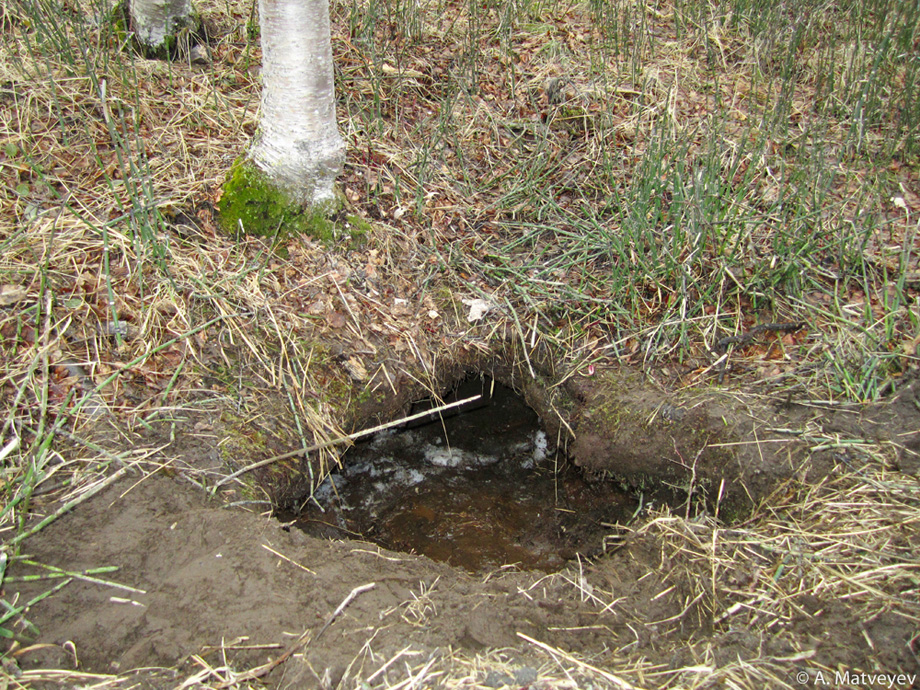 I’m not a coward, but my knees were shaking. I was getting a bit excited at the moment. Illuminating the gloomy den with camera flashes and making sure the apartment wasn’t occupied by its lodger, I put on a raincoat and crawled inside. Igor Petrovich was extremely delighted with that sight kept on making snaps of my volunteer “mining expedition”. 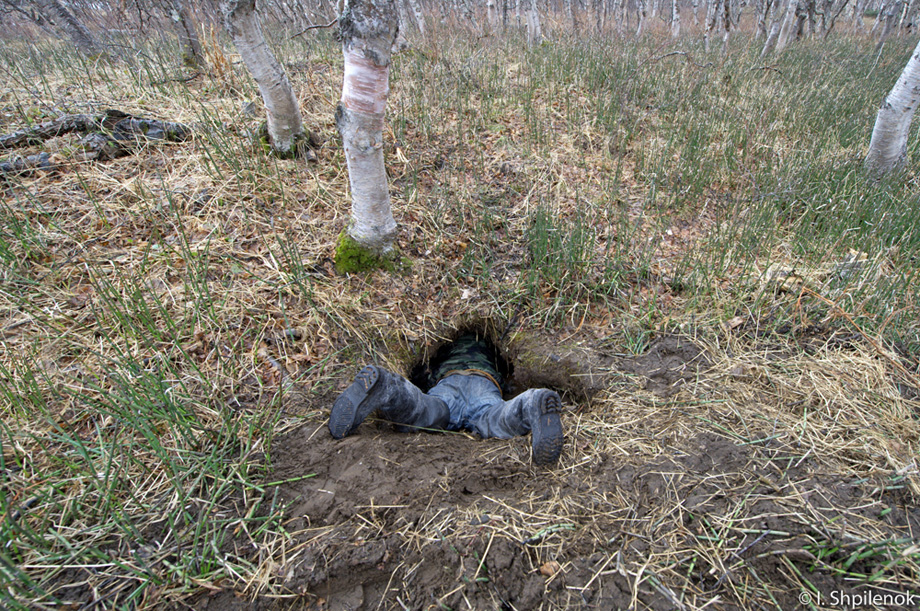 I turned off the torch and rest the den’s remote wall with my forehead. Then I rolled up into a ball and got exactly into the contours of Suzemka’s body. 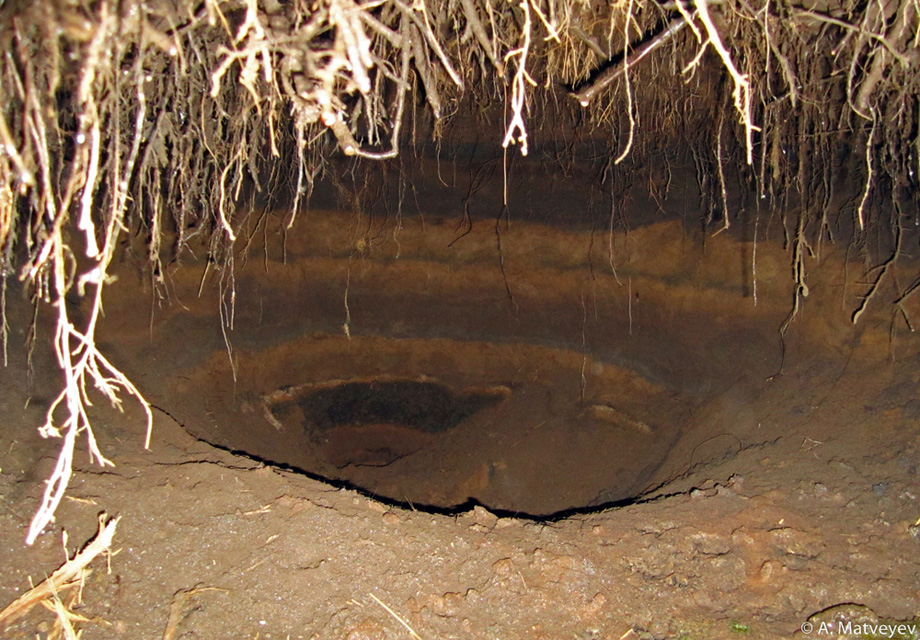 It turned out there was no unpleasant smell inside the den. Better to say, it smelled almost nothing, probably just like mud or cellar air, it was damp, that’s it.

One meter under the ground, below the trunks of birches in a, beg your pardon, DEN, I felt strangely calm and comfortable. However the potential danger was looming, as bear could appear any moment. While I was changing poses and angles, Igor Petrovich tried to depict bear’s dwelling interior with our numerous cameras. 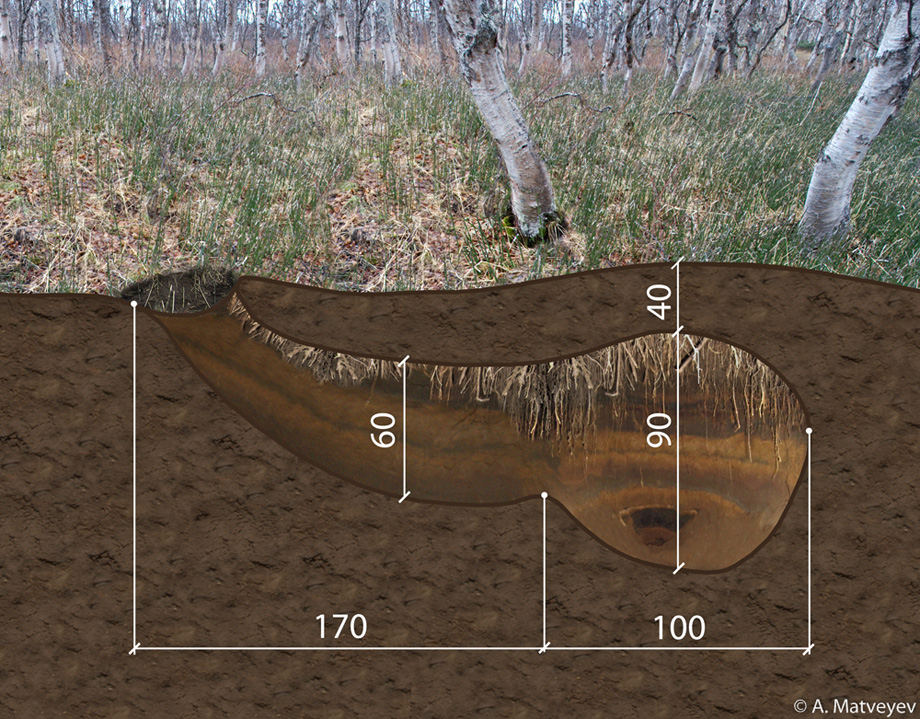 After I had great fun on the bear’s bed, I started to crawl out thinking over dimensions necessary for the schemes and den’s 3D models. 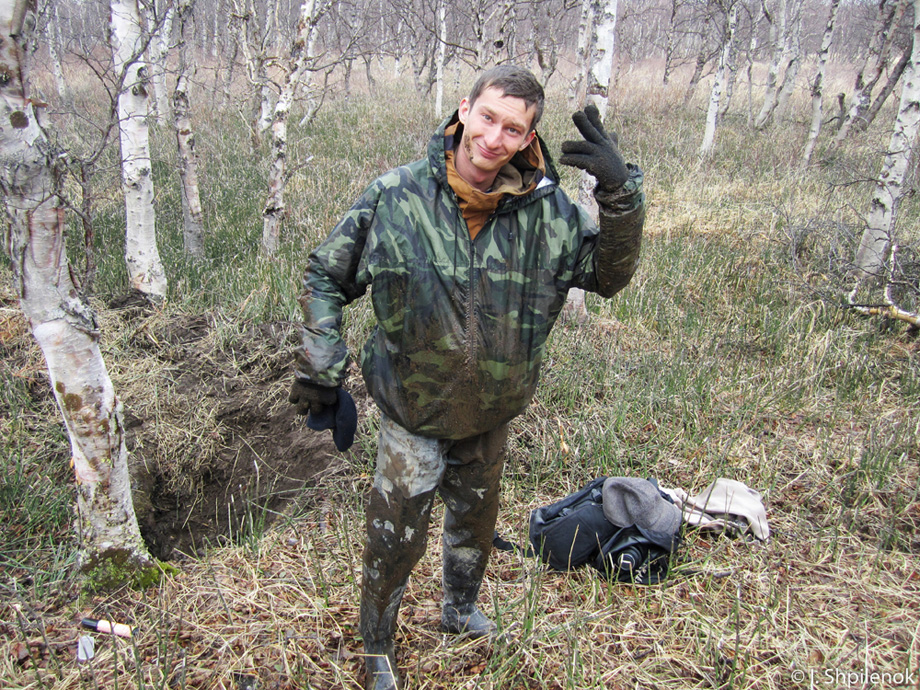 Despite the mud that covered me with an even layer from top to bottom, I was smiling with joy, my eyes wild. Those emotions are priceless for me, because not everyone managed to experience them. 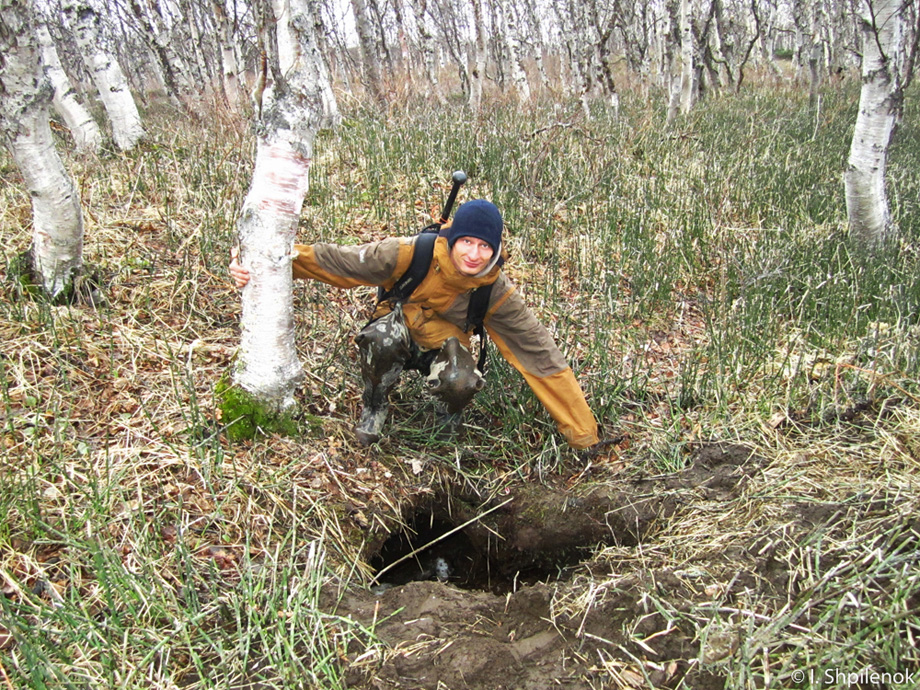