It’s always more rewarding to try to excel your own achievements than anybody else’s. When together with my friends I was heading for that magnetic and at the same time dangerous Tolbachik volcano, I didn’t have a thought of conquering its top, especially at night. The main goal of that trip was shooting the foot of the volcano the mysterious dead forest for my film. But, having done such a long way, I decided it’d be wrong not to visit that exceptional place. I couldn’t let it happen.

Alexander Bichenko’s snaps of the eruption as well as his accounts of the events have delighted me not once, and I was eager to see Tolbachik with my own eyes.. 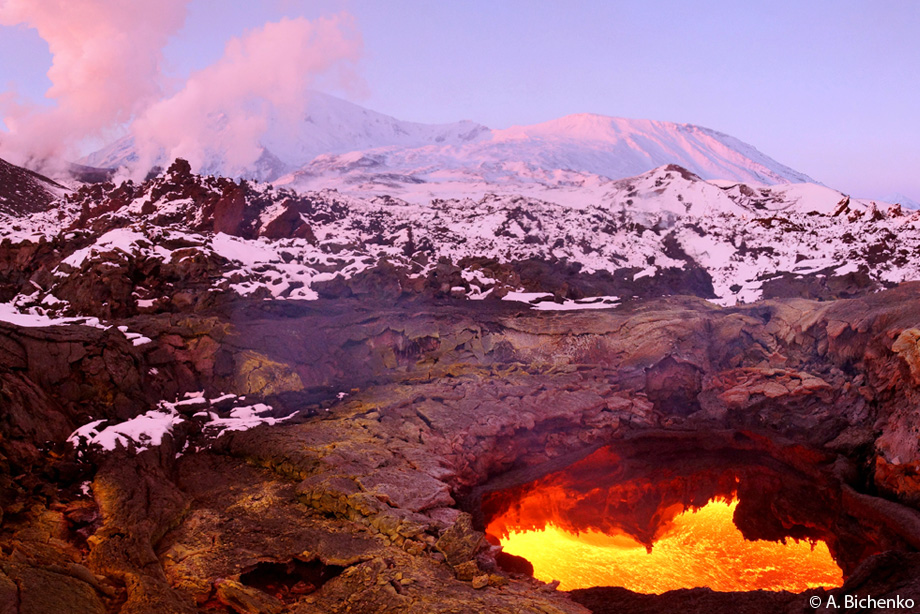 At my age, I’ve managed to see a lot and to visit a number of places, but one thing will be stamped in my memory forever – the boiling pot of flaming lava in volcano’s active crater under starlit sky and enigmatic moon. I fell passionately for it, as if it were a human being. During the short but tough journey I talked to Tolbachik asking it to let me come, to give me enough strength and patience.. 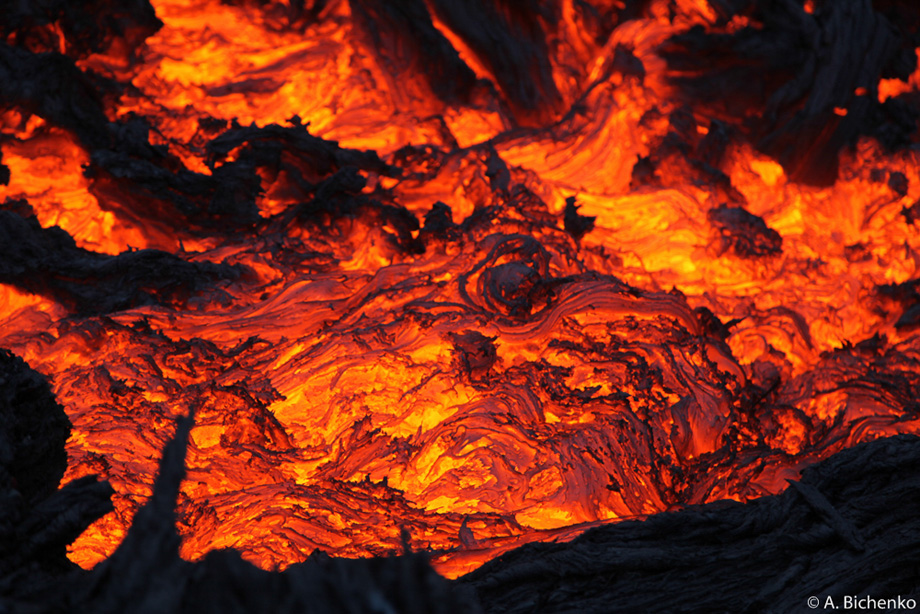 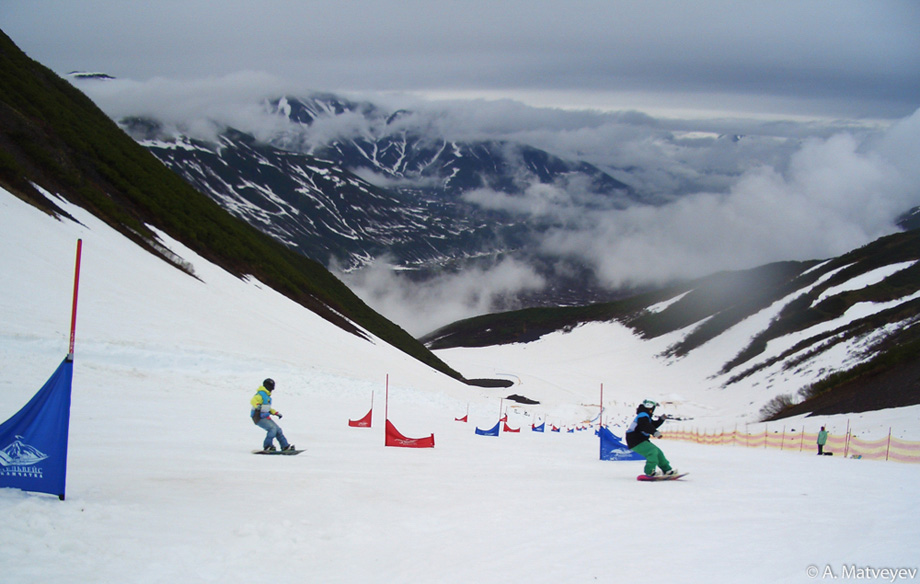 The recent Far East snowboarding championship that took place on the Viluchinskiy volcano at the beginning of summer rewarded me with ankle ligament rupture. The root of it – a ridiculous fall in «snowboard-cross» discipline. Those who are willing to get a piece of advice firsthand «How to have a one-legged summer vacation and stay high-spirited», please, leave personal messages, because now I want to recount another story. 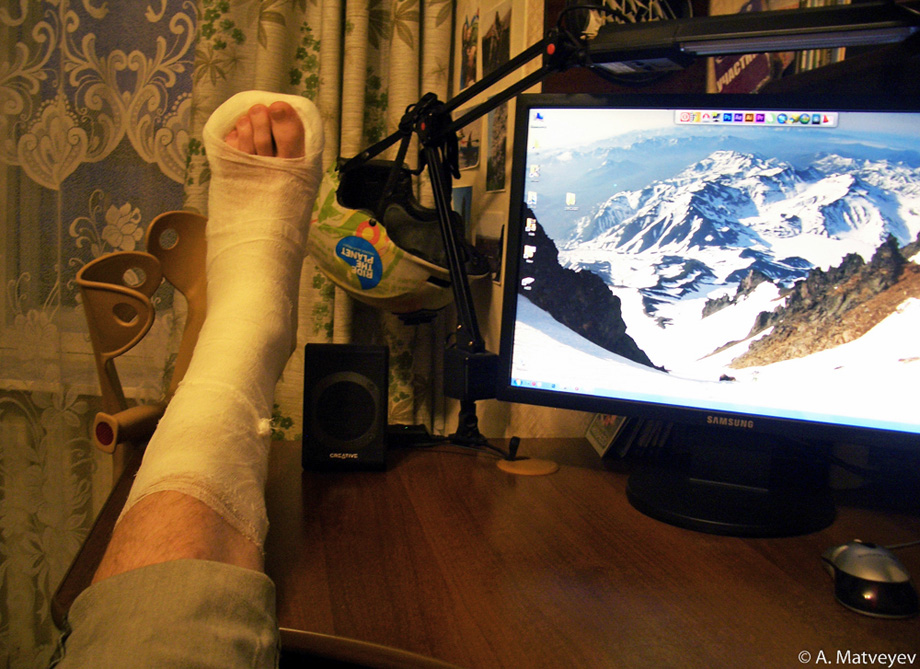 Anyone can take a look into “the devil’s mouth”, it doesn’t call for undue physical efforts, however, mind to arm yourself with patience from the very start. It’s not a secret that transportation to the fire-spitting volcano is defined by personal financial abilities – some travellers opt for jet choppers while others find it romantic to have a night’s bumpy ride in a truck. As for me, our company had a car, or rather a small private tank on gigantic wheels and with a physical for unleaded fluid. 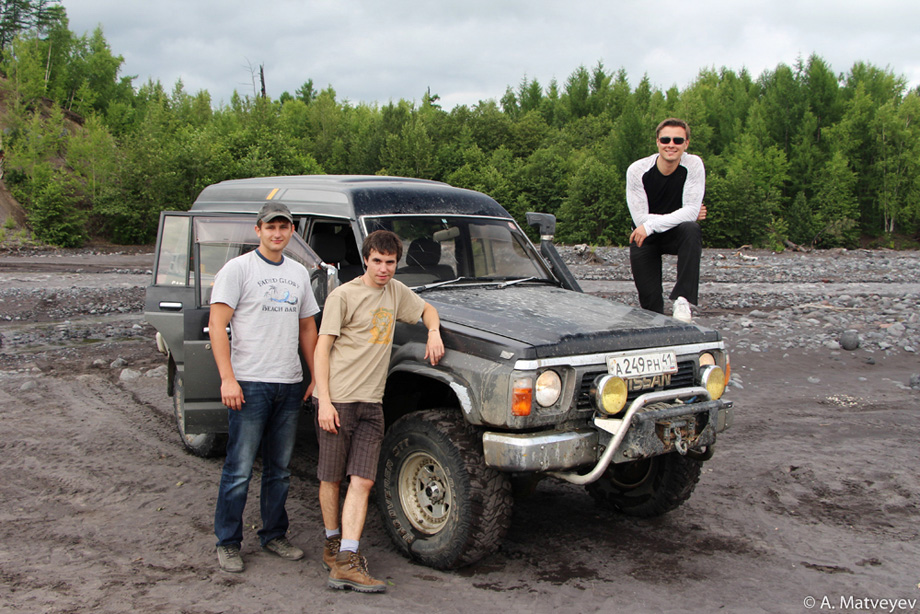 We started our journey at the first light of the day. Having filled up our insatiable means of transport, we made our way to Sokochi settlement to refresh ourselves. Besides fish, caviar and crab Kamchatka has got one more trademark – Sokochi’s pies. Foreign guests will hardly appreciate that mother wit of Russian vendors, but I’ll remember the «BlackBerry pie» poster (inscription written on a piece of cardboard with a thick mark pen) equally with the Tolbachinsky eruption.

The asphalt road came to an end as soon as we were over our pie supply in our «muscle car», and the next three hours to Kozyrevsk we went on half-flat tyres. Usually the trip to Kozyrevsk from Elizovo takes six hours full speed. After refueling our car on the only petrol station in the vicinity, we turned off the road and went eastwards to the Tolbachik volcano. The Studennaya River was our first obstacle. It’s a serious hindrance for a common car, but for our tank it was a piece of cake. 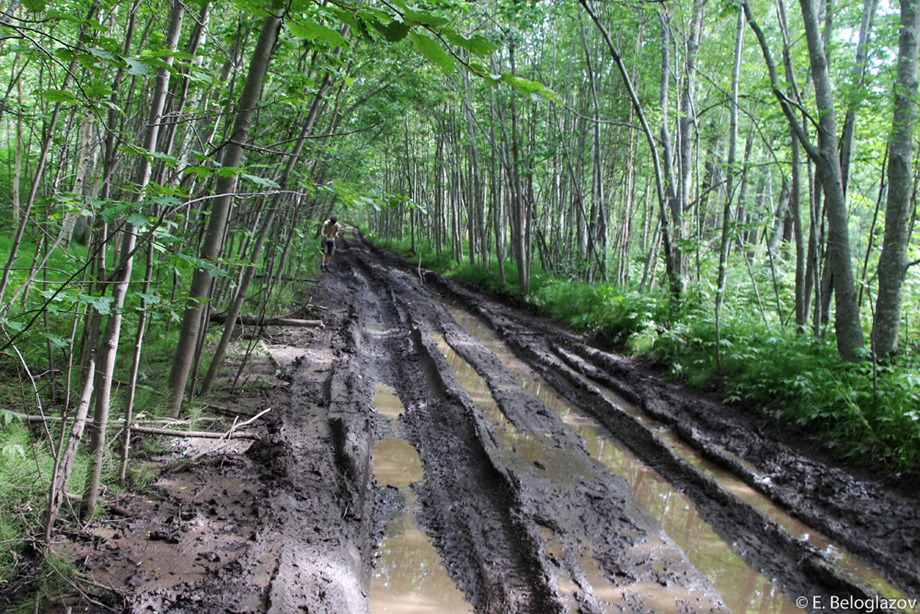 We crossed the river without delay, however, later we got stuck (both axles) in a big mud puddle… If you decide to go to Tolbachik single-handed, mind that you’ll need to have a winch at least. It rescued us that day. 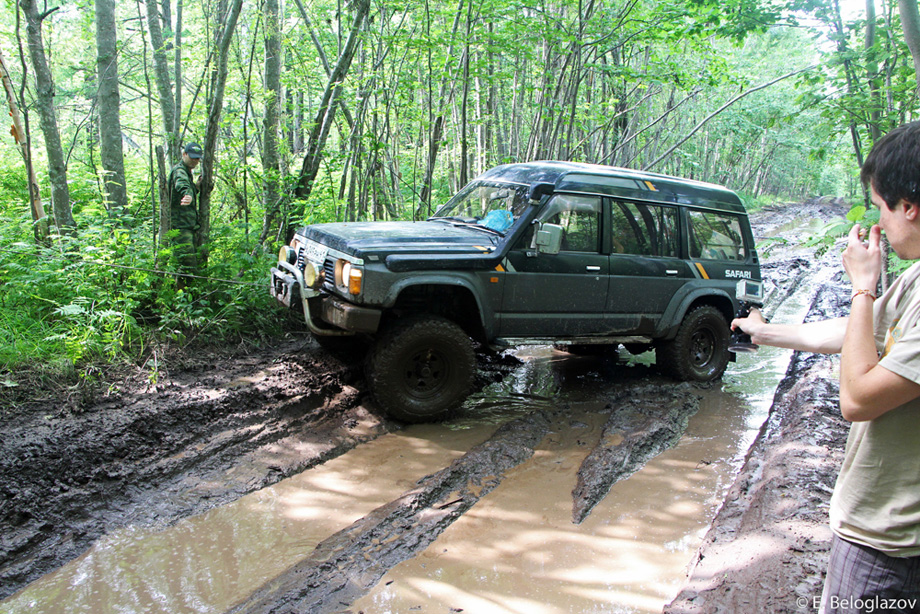 Having traversed several rivers and kilometers of slush, having worked our way through the forest cut round the fresh lava stream, we reached the old road that soon brought us to the temporary camp. 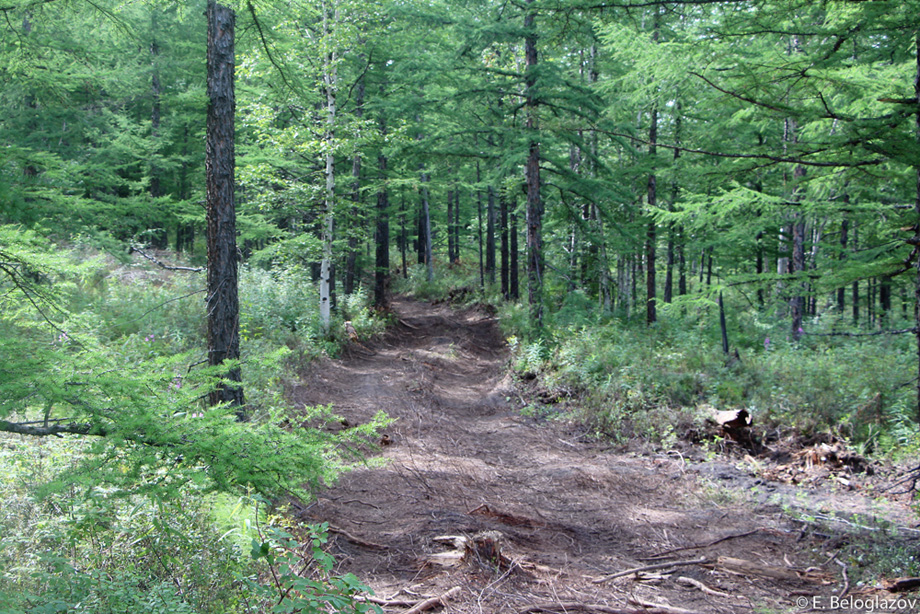 Kamchatka’s weather is unpredictable and capricious, thus, to feel sure, I’d highly recommend every traveller to take a trusted GPS-navigator with downloaded maps. 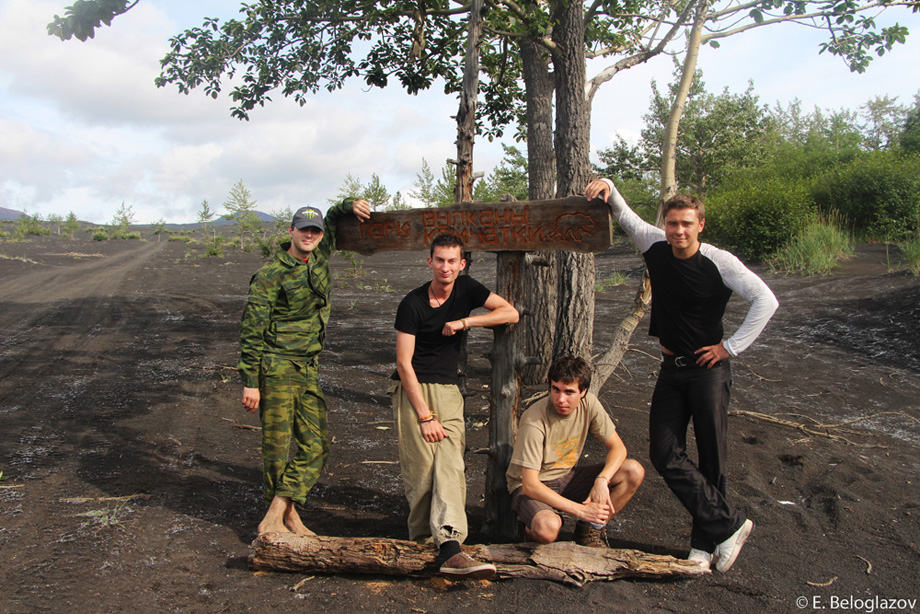 After we’d got to the place and set up the camp, I surveyed the environs trying to find something that would catch my eye among endless grey slag landscape and even scared some foreigners with my one-legged silhouette. 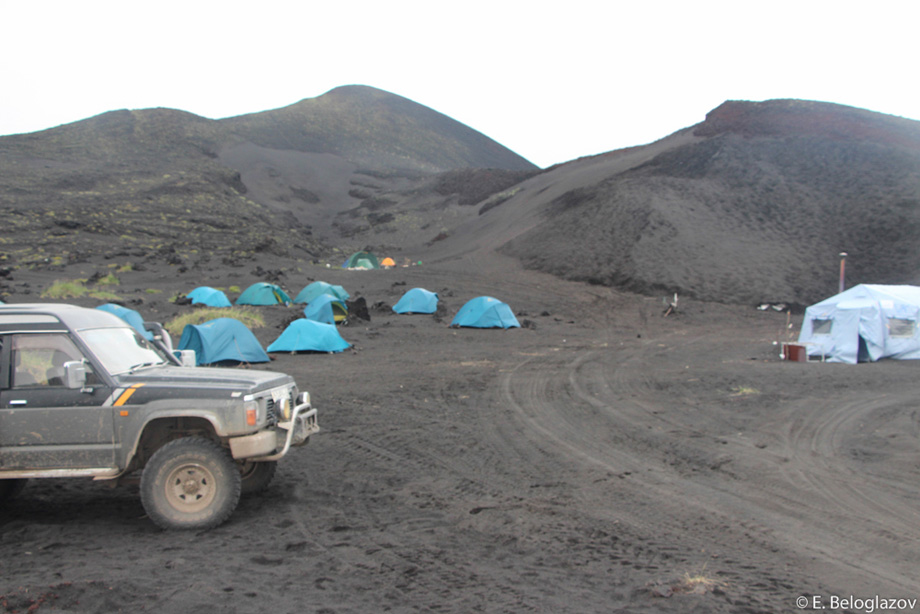 After dinner we took along all necessary equipment and started on our journey, having not the faintest idea about its complexity and duration. 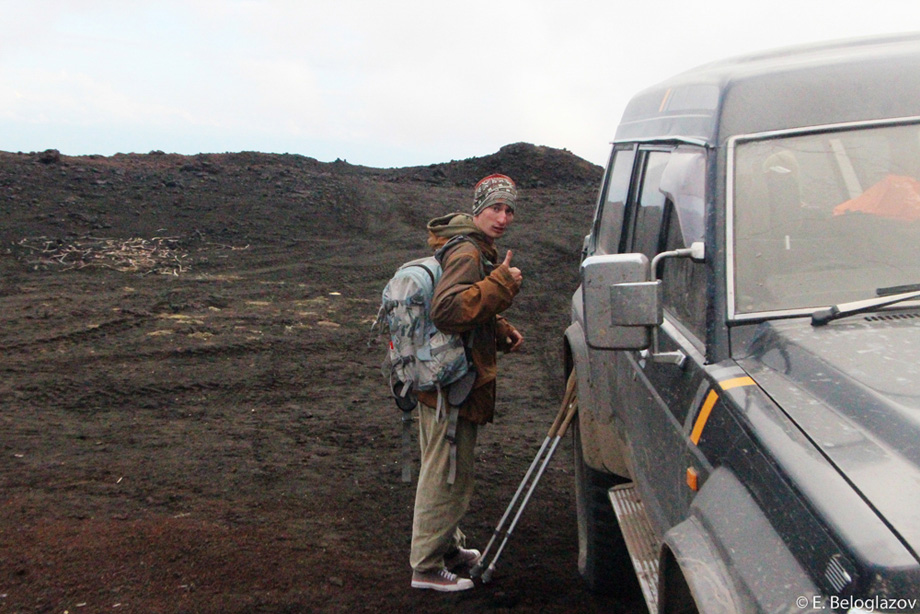 It’s not an easy task to climb a small hill (not to mention a real volcano) on crutches. To succeed in it you need to join in one outburst everything that boils inside – determination, devotion, strength, desire to reach the top and to see the eruption alive, desire to prove you can do it and anyone can. Surmounting pain, step by step (or better to say – hop by hop) I went forth. 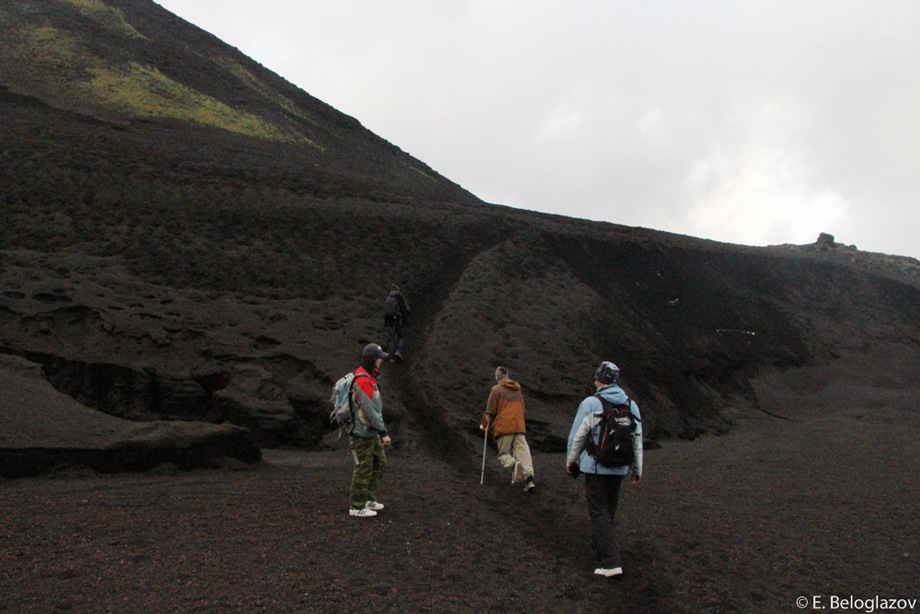 Nevertheless the first kilometer I was ahead of the group, walking in sand and slag, but, as soon as I reached the rim of the lava stream, I felt that firm pivot inside gave way. 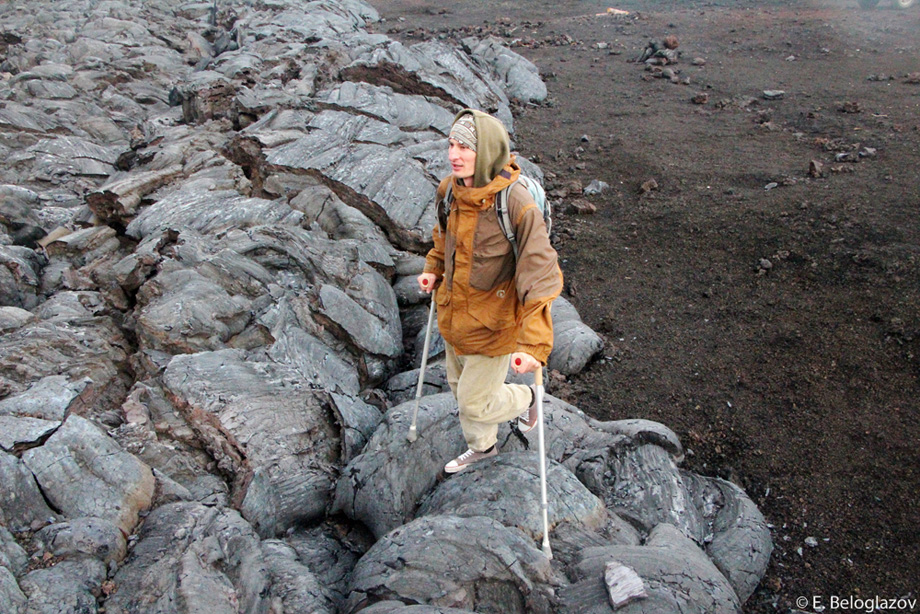 It doesn’t mean I got dispirited or the idea of ascend burned out, no. I just imagined how much time I’d need, and it troubled me a bit. 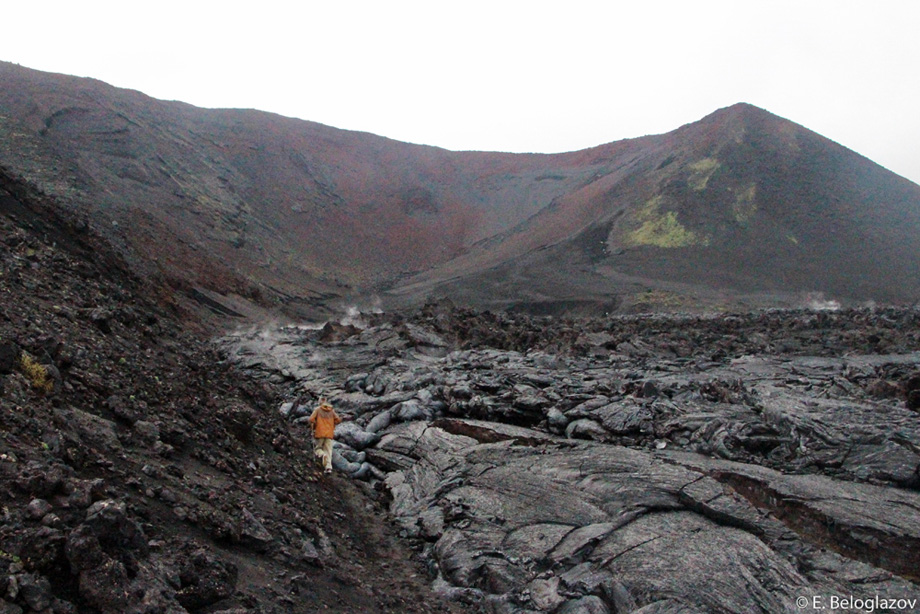 In any case, I had to cross the lava flow in a definite spot. It was the only way to start the ascent.. 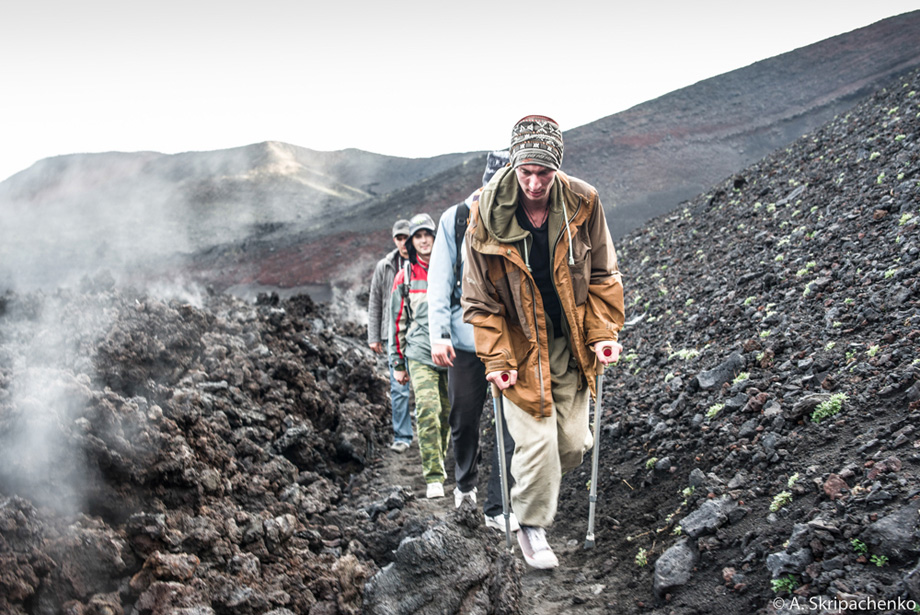 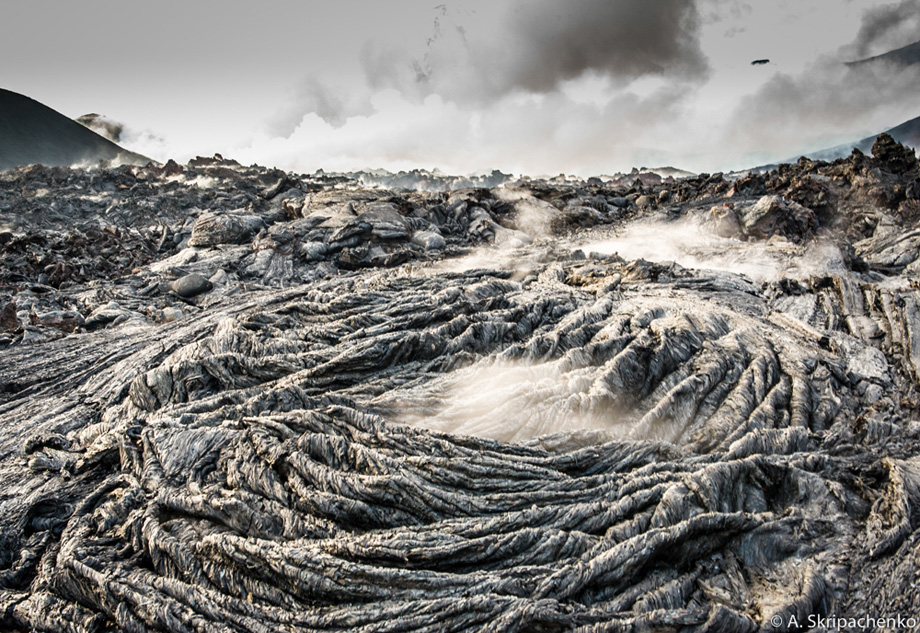 My two-legged friends took a backpack with a camera, left me a torch and hurried on to climb the crater before dark. I was told to wait for them at the trail and stand where I was. 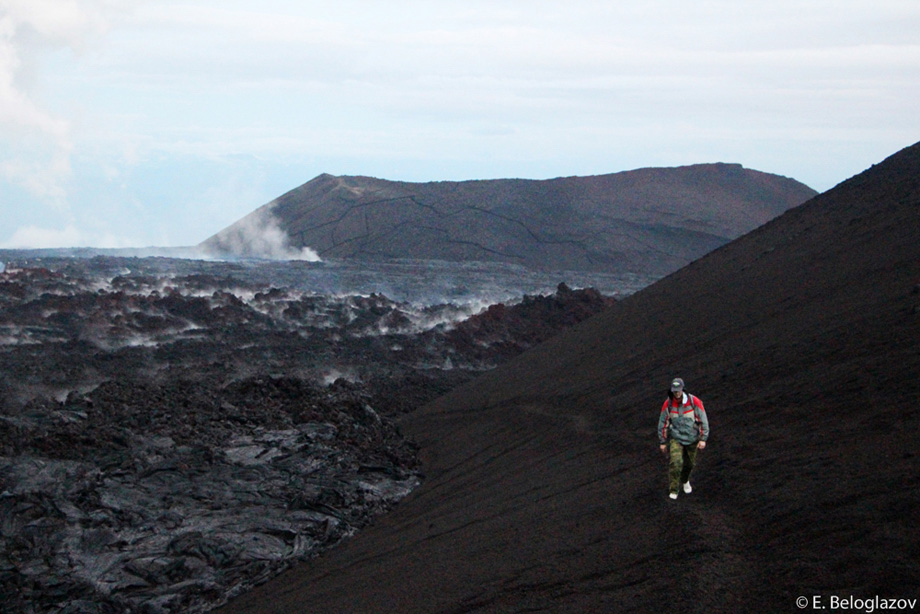 Naive people! Like a sapper, I tapped every lava segment and stepped forward cautiously only if I was sure it was safe. Everything around me was fuming, hissing and collapsing! If only I knew I’d have to run quickly and briskly the way back in my scorched sneakers, I’d moved faster. But in the beginning I was rather wary. Only when it started to get darker, I rushed along. 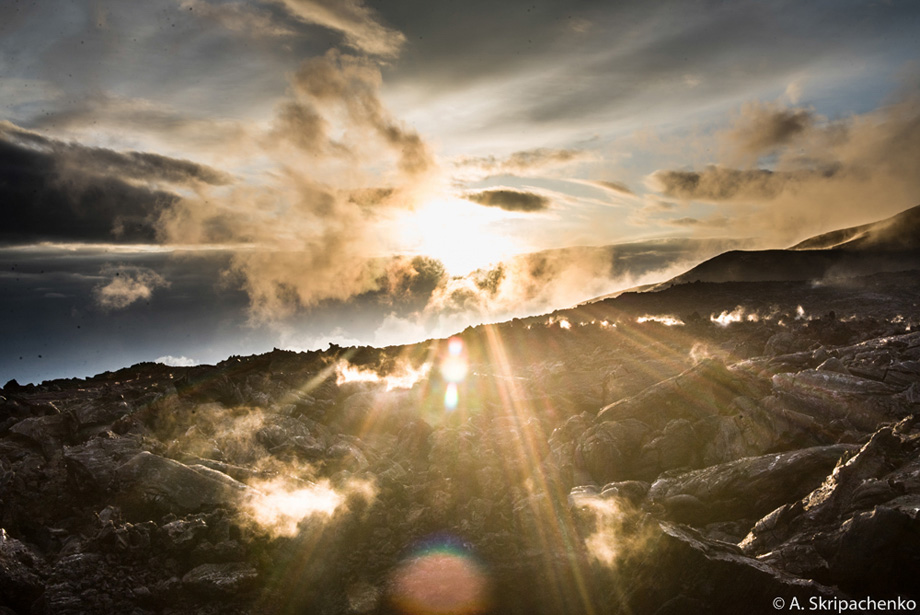 In a few hours of constant self-fight, I got to the opposite side of a slag bank and saw three approaching strangers. My sight made those guys look perplexed. One of them asked to take a picture of me while other men yelled «Fuck it! I’ll make it». They found the energy to turn back and retry to conquer the top. On my way up to the cone I was feeling anxious about myself and my friends who were far away from me, but my trusted GPS-navigator and my high spirits helped me to press the worry. Thanks to random travellers who shared their experiences and prompted the better side for ascend and the safer way to the look-out point. Joking apart, but those hints turned extremely useful, especially in pitch darkness and thick fog, when the path was illuminated with lava veins below and with flying bombs above. 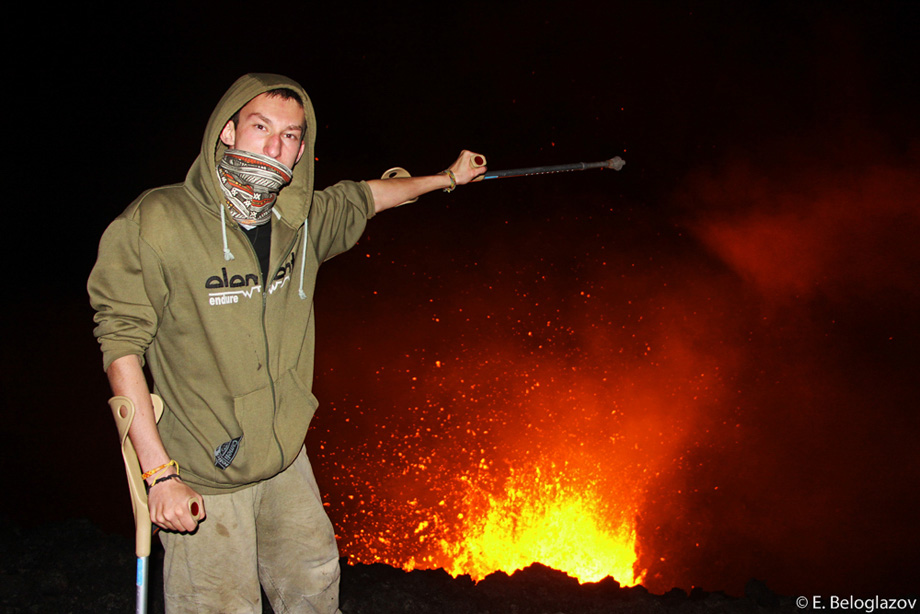 Cursing myself for being stubborn, rash, for that damn fall on the competitions, I was climbing up the slag cone, resting upon ailing leg, as my arms, believe my word, were worn-out. Finally a bit later than my full-fledged friends I reached up the crater of the Tolbachinsky volcano.. 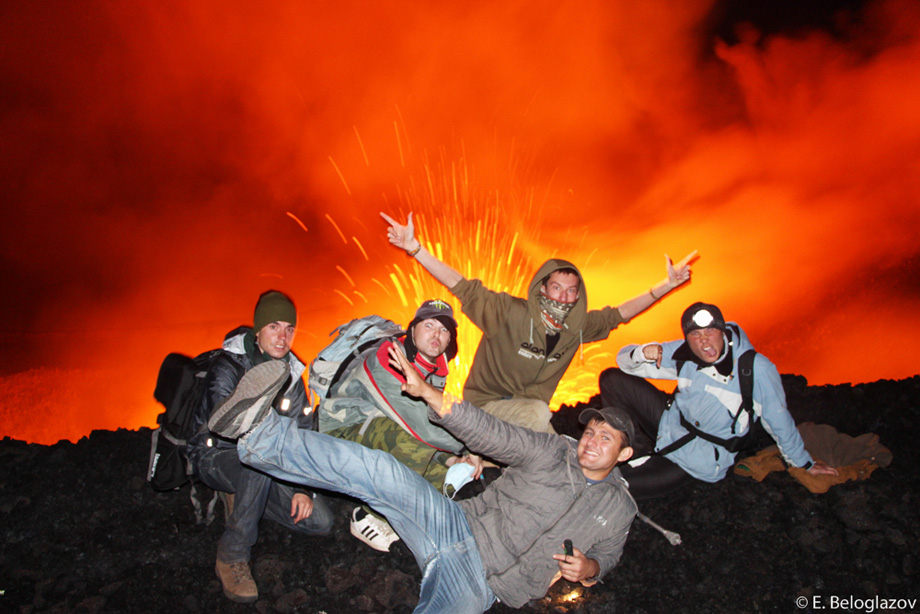 I won’t describe that shock and horror in the eyes of tourists who saw me that night in the crater. What’s more important – my emotions. And they had no limits. I was on top of the world to see my friends, the crater and the stars.

It was deep at night and we happened to be in one of the most dangerous places on the planet; under flying volcanic bombs in the active crater we felt safe and sound, peaceful as if sitting by the camp fire. 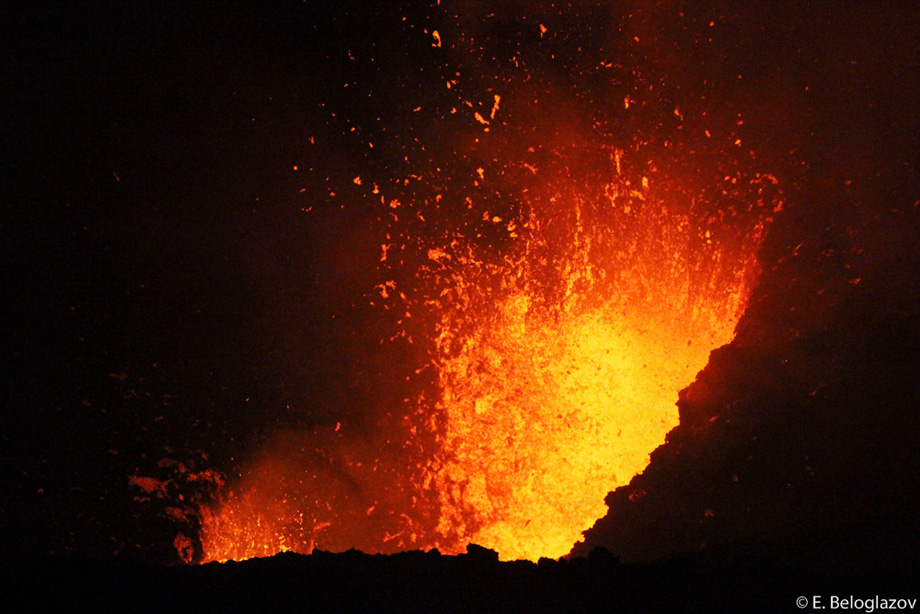 The way back to the camp took a long time. We managed to get lost, to find ourselves on a deadlock, to express all our storming emotions. But it was nothing. The most important thing in our lives has already happened! We’ve witnessed that breathtaking eruption! Flabbergasting! Later we came to our car and reached the camp, needless to say, we crashed out in the twinkling of an eye. A few hours flew by and morning sneaked up suddenly and as usual without ceremony.

My body was begging for rest, but bright sun was luring us in the fresh air. Having packed the camp up, we went southwards to the magic and enchanting dead forest. 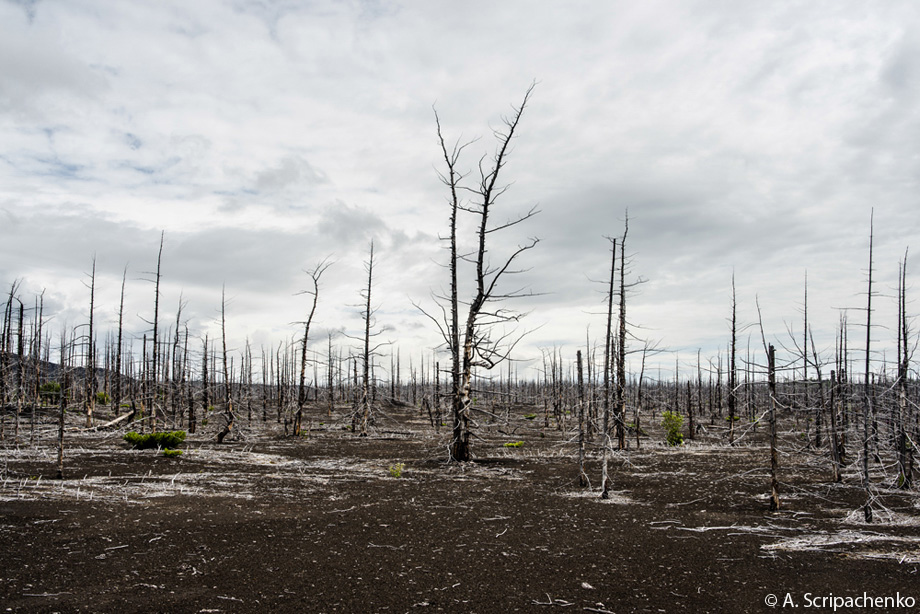 After we had feasted our eyes with the fantastic views and had shot enough material, we started the return journey..

I did it! We did it together! Which means that it is within our power. The main thing is to believe everything is possible and never give up!